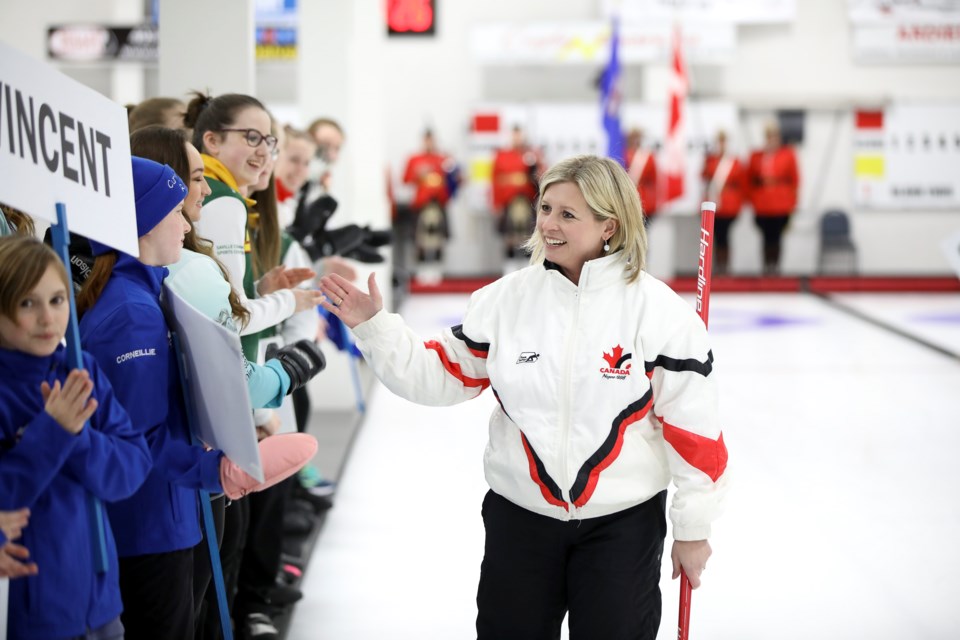 2020 Alberta Scotties co-chair Atina Ford Johnston, here high-fiving curlers at the U18 provincials in Okotoks, won a gold medal with Sandra Schmirler at the 1998 Winter Olympic in Nagano, Japan. Photo by Brent Calver/OWW.

The co-chair of the 2020 Alberta Scotties brings a golden resume to the table.

Atina Ford Johnston was a member of the Sandra Schmirler rink, which won the first official curling gold medal for Canada in Nagano, Japan in 1998.

She joined the famed Schmirler rink in 1997 as a fifth and the team went on to win the then Scott Tournament of Hearts and then the world title in Switzerland.

“Sandra approached me and they wanted someone who could join them,” Ford Johnston said. “My understanding is Sandra was pregnant and I had skipping experience at the junior level and had curled against Sandra many times.

“My mom was also the coach, so that helped.”

The rink carried that momentum into the 1998 Olympic trials – beating now Okotokian Shannon Kleibrink in the final.

Although a fifth, Ford-Johnston was way more than a spectator in Nagano. She ended up curling 2 ½ games when third Jan Betker got sick.

Schmirler went on to beat Denmark 7-5 to win the gold.

It was key that Ford Johnston got to throw some rocks — had she not got into a game she wouldn’t have received a medal.

She added the Schmirler rink had her curl in part of a game before Betker got sick to ensure she was eligible for a medal.

Ford Johnston has an impressive legacy with the roaring game as she helps co-chair the 2020 Alberta Scotties.

She won a Canadian junior championship in 1990 for Saskatchewan with her sister Cindy as lead. She went on to win a bronze medal in 1991 at the world juniors in Glasgow, Scotland.

Ford Johnston grew up in Gray, Sask, and her father, Gary, represented Saskatchewan in four Briers, curling with Garnet Campbell and Bob Pickering.

“That’s where I got my first taste of curling,” she said. “My grandfather curled against the famous Richardson teams. I was around curling all the time growing up.”

Ford Johnston has been involved with the Okotoks Curling Club since moving to Big Rock Country in 2014.

She was approached by fellow co-chair Mike Libbus to help with the Scotties in Okotoks which runs Jan. 21-26.