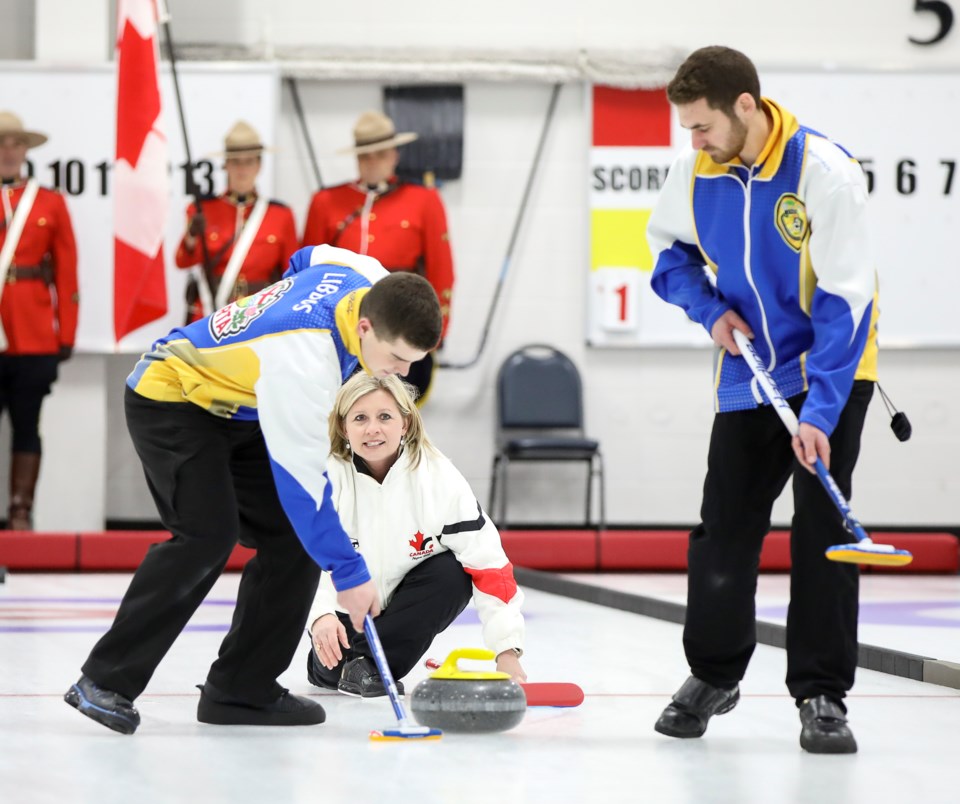 Atina Ford Johnston, here throwing a rock at the opening ceremonies for the U18 Provincials at the Okotoks Curling Club, is the co-chair of the 2020 Alberta Scotties and is helping with a fundraiser for the Sandra Schmirler Foundation. (Brent Calver, Okotoks Western Wheel).

Curing fans at the 2020 Scotties Alberta Tournament of Hearts in Okotoks later this month can help babies while paying memory to one of the most beloved women curlers of all time.

Ford Johnston was a fifth on the Schmirler rink, which won the 1998 Olympic gold medal in Nagano, Japan.

The foundation’s mission, stated on its website, is  "to raise funds for hospital newborn intensive care units to purchase life-saving equipment for premature and critically ill newborns and provide scholarships to junior curlers; giving each the chance to grow up and be a champion, like Sandra.”

Schmirler was more than a skip to Ford Johnston.

“She was a genuine, down-to-earth person,” Ford Johnston said of Schmirler. “She was a real leader, a real role model, just a really nice person.

“She left a really great legacy for young families and their babies.”

The crowd sweep in Okotoks to help babies is part of Schmirler’s history.

“She had the legacy of crowd sweeps at different curling events and whatever money was raised from that a cheque was donated to the local hospital for the neo-natal unit,” Ford Johnston said.

She said the funds raised in Okotoks will support neo-natal intensive care in the area.

“Family was really important to her,” Ford Johnston said. “She didn’t know she could have children and when she got pregnant with her oldest one, it was very important to her to give back to hospitals which helped support her.

In fact, it was while Schmirler was pregnant with her first child in 1997 that Ford Johnston was asked to spare on the team in case there were any complications.

Those anticipated to help with the crowd sweeps at the 2020 Scotties include Okotoks’ Shannon Kleibrink, the 2006 Olympic bronze medallist, Susan O’Connor, who won a silver medal at the 2010 Olympics with Cheryl Bernard, Ford Johnston and members of the curling community.

The 2020 Scotties Tournament of Hearts runs Jan. 22-26 at the Murray Arena at the Okotoks Recreation Centre.